PLEASE NOTE: This page is under construction and is under the process of revision.

Modesty... what happened to it? Why has modesty not become an issue in our society today? For hundreds of years it was a requirment for men and women to dress modestly. But why not now, in the 21st century? What was it that caused the modesty issue to fade away?
How should a woman dress? What do the scriptures say about this? 1 Timothy 2:9, "In like manner also, that women adorn themselves in modest apparel, with shamefacedness and sobriety; not with braided hair, or gold, or pearls, or costly array."
The above verse tells us that a women should dress in modest apparel (clothing), without feeling shameful. Braiding the hair, shiny gold, pearls or costly (expensive) array (clothing) should not make the women. She should be wearing meekness and humbleness!
So, what started all the lustful, improper dress for women? The start of WW1 was the beginning of a major change in the way women would dress. By the time the feminist movement came on the scene, most had forgotten what modesty meant. Short sleeves and lower necklines started in the 17th century. Clothes seemed to be get tighter and tighter by the 18th century. By the 19th century clothes were extremely tight.
On more than one occasion, I have witnessed as the third person, how much men enjoy looking at the female anatomy. It does not matter if the man's wife is present or not. The animal instincts kick in, the eyes are fixed and set on the prey. All life around the object(s), at that moment in time, seems to come to an abrupt hault! Yes, the female anatomy is one of the biggest temptation men are faced with! The Messiah told us that a man could lust after a women in his heart, just by looking at her (Matthew 5:28)! Regardless of his marital status, he is committing adultery. If you happen to be one that struggles with this sin (you are not the only one). Satan, you know the one who likes to tattle on the brethren, knows this as well. That is why we all need to work together! We need to confess our sins, ask for forgiveness, then pray without ceasing. We need to put on the whole armour of Elohim including the mind of Mashiach! Even women can get involved by dressing more modestly. Women should not want to cause a brother to stumble. But modestly does not start with women. Men have their part that they take in a role of modesty. The following is a time-line of fashion throughout the years. 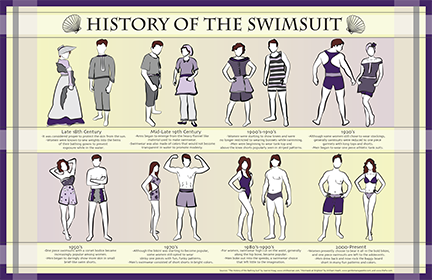 Down throughout the ages, modest has gone from classy, to casual and slowly down into the dead end road of indecency. Not only are men and women wearing less than their undergarments in public; they have gone backwards! Men believe they are women, dressing more provocative then women in their natural state. Not only are men and women dressing as the opposite gender, but they are even taking hormonal replacements to completely reverse their gender. With the end result completely unrecognizable!
Setting the gender confusion to the side, oddly enough society doesn't take regard for modesty anymore. Back before the 1900's, people would have been looked down upon, shunned or even stoned with rocks (in scriptural days) if they dressed the way they dress today. Nowadays people become famous celebrities, or popular, if they are immodest. You are considered weird in the eyes of most society if you dress modestly? Sounds backwards, if you ask me. We need to ask, "What is it that I must do to be modest?"

Jeremiah 6:17,"Also I set watchmen over you, saying, Hearken to the sound of the trumpet..."